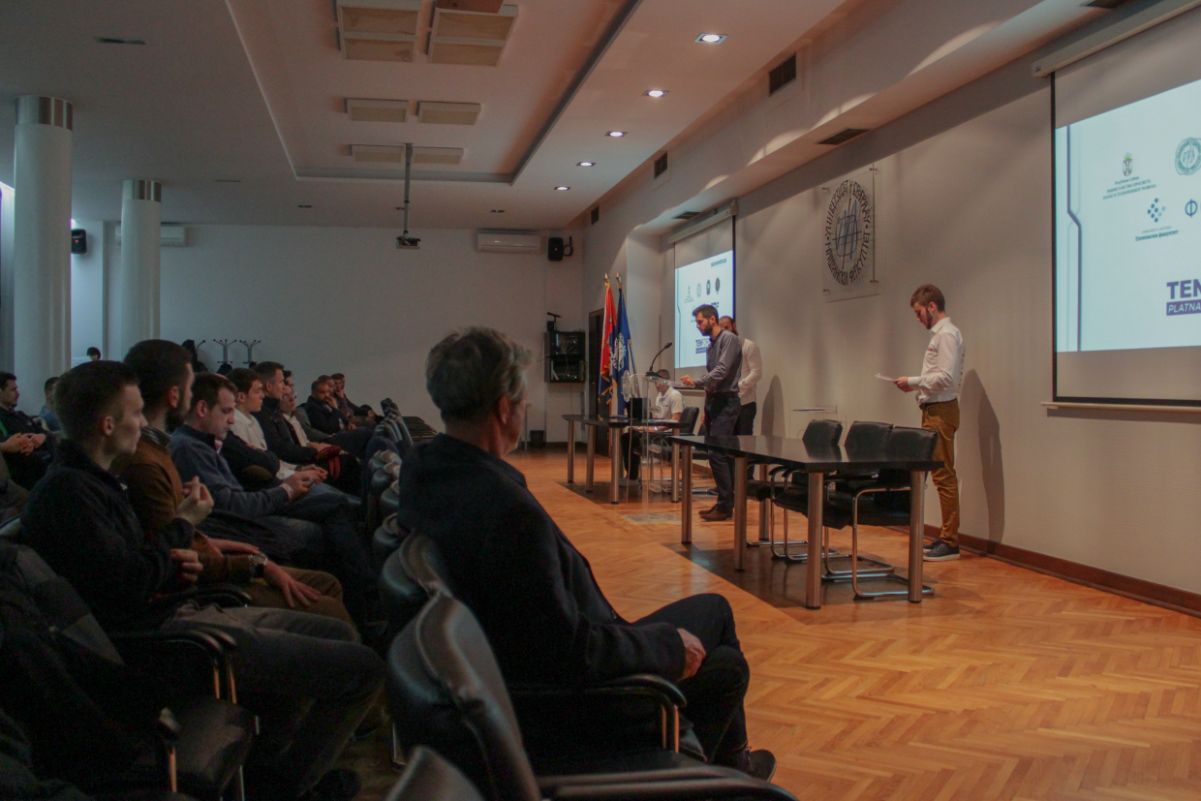 Sponsorship evening for the ninth birthday

On Tuesday, November 26, many representatives of the University of Belgrade, project sponsors and friends, fellow students as well as alumni gathered in the hall of the Faculty of Mechanical Engineering to celebrate the ninth birthday of the first Serbian Formula Student team, “Road Arrow”.

At the very beginning of the evening, Professor Marko Miloš, mentor and a great supporter of the Road Arrow team, addressed the audience. He emphasized how proud he is of the students’ dedication to the team, and announced that he will be the mentor of the Road Arrow for the next five years. He praised the knowledge, enthusiasm, and euphoria of students who have worked hard for nine years on the project, and thanked the sponsors who recognized the importance of the project.

After that, a representative from the Faculty of Electrical Engineering, prof. Mladen Terzic, the mentor of the electric vehicle team, also addressed the audience. He emphasized the importance of activating students from the Faculty of Electrical Engineering, without which this venture would not be possible, as well as all the possibilities offered by the construction of an electric vehicle and the opportunity for advancement in this, so far, insufficiently researched field.

Subsequently, the new team leader for the C vehicle, Marko Tomanovic, took the opportunity to point out that this year the Road Arrow team had 100 members, and referred to the previous season, during which all team members had a chance to learn a lot and see what should be promoted in the upcoming season. Marko mentioned success in competitions in Hungary, and in the Netherlands, where the team finished fifth in the business plan discipline, as well as in Rijeka, where the track record was set and the team won first place in the Sprint race, as well as third place in engineering design.

Bogdan Carapic, the new team leader for the electric vehicle, mentioned racing on the Silverstone track in the UK, where the team finished fourth in the overall Class 2 ranking, second in design defense and fifth in cost analysis.

“We also owe a thank you note to the general sponsor who has been with us for the past two years, Tenfore, whose porch has been of great benefit to us,” said Marko, outlining plans for the next season, which includes improving the formula and correcting errors from the previous C vehicle, for even better results.

As for next season, the idea is to work on two vehicles, two formulas, for the first time in the history of the team.

At the end of the ceremony, thanks were given to the present sponsors and friends of the project, as well as representatives of the University of Belgrade. After the speech, a cocktail party was organized for all the guests, where they had the opportunity to socialize with both current and alumni members of the Road Arrow team, and in a more informal environment meet young people whose commitment puts the team on a high ladder.