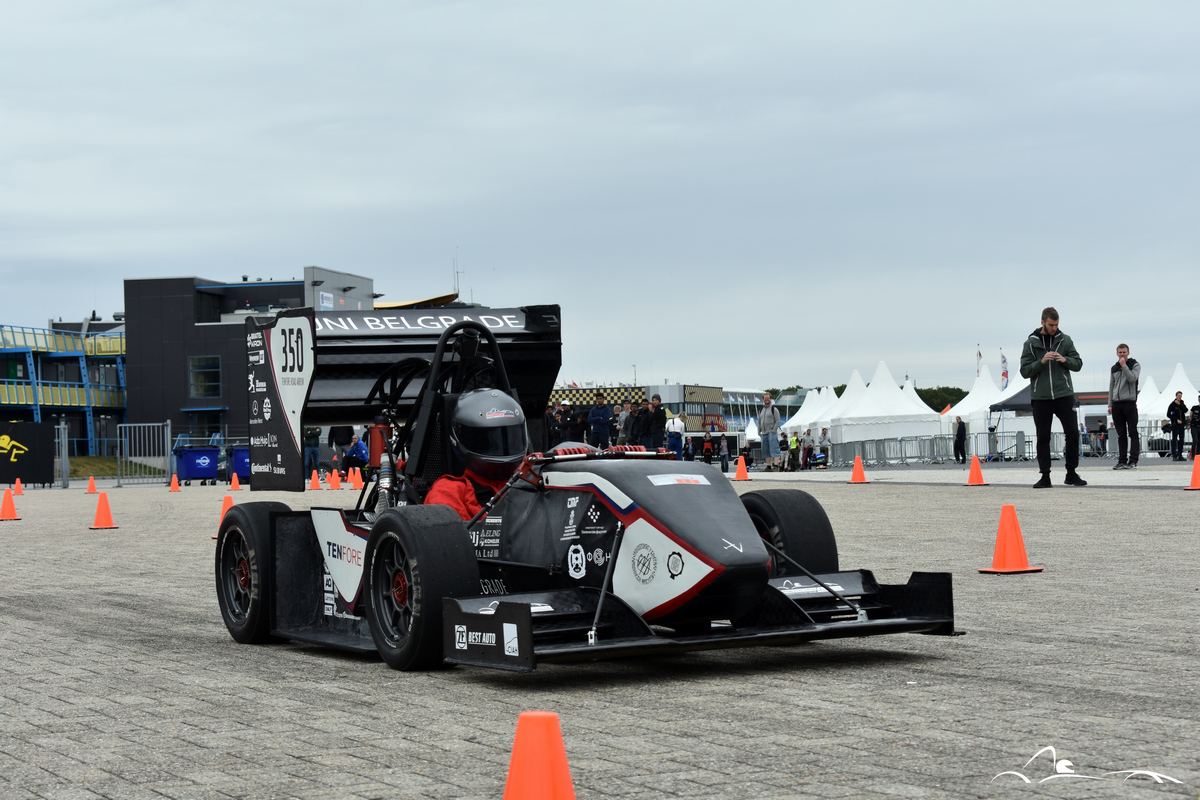 In the competition season 2019, Tenfore Road Arrow team competed in two prestigious Formula Student competitions – in the Netherlands and Hungary.

The first competition was held from 7th to 11th July in Assen, the Netherlands. When the team arrived in Assen, that day was all about vehicle preparation and preparation for static and dynamic disciplines.

In the early morning hours of the second day of the competition “Road Arrow 2019” was in line for technical inspection, to be able to meet all the demanding criteria and successfully pass the required tests for participation in dynamic disciplines. After successfully completed tests of tilting, braking, noise and egress driver test, the same day followed  two static disciplines: Design Event and Cost Report. Presentation of engineering solutions on the vehicle and Cost Report have received positive comments from judges in the Netherlands.

The third day of the competition was reserved for dynamic disciplines. Before the official competition in dynamic disciplines, the team used the training track (TT Assen). Shortly after entering the test area, a malfunction on the vehicle occured. Unfortunately we were unable to continue further competing. After hard work and trying to rectify the fault on the track, a decision was made to return the team to Belgrade, to prepare the vehicle for the next competition.

A period of three days between two competitions was used to failure repair and check all other systems on the vehicle. All defects were removed and the vehicle was ready for the next competition.

The opportunity to compete with other teams from around the world, Tenfore Road Arrow team has already emerged from 17th to 21st July 2019. The team from Belgrade competed for the first time on the Formula Student EAST competition in Zalaegerszeg, Hungary.

During the first competition day, the vehicle successfully completed a complete technical inspection, after which it received all the stickers and confirmation that it was ready for the track. The second day was quite successful for the Tenfore Road Arrow team. Good results have been reported in all static disciplines. The judges liked how Belgrade students produced a Cost Report in detail, so the discipline of Cost Report was successfully completed. The design, ideas and innovations of the vehicle have not gone unnoticed in this competition, positive criticisms were a wind in the back for the following disciplines.
The highlight of this day’s success was the Business Plan Presentation. In a fairly strong competition of 25 teams competing in the competition of an internal combustion engine formula, Tenfore Road Arrow team won a great 7th place!

The beginning of the third day marked everyone’s favorite and well-known sound of the “Road Arrow 2019” engine. Great results have achieved already in the first dynamic disciplines. Record times, shorter than all previous competition years, have been achieved in the Acceleration Testand Skid Pad Test. During the Autocross discipline, the Tenfore Road Arrow team vehicle proved its reliability and manageability.

The last day of competition in Hungary was reserved for the most demanding competitive discipline – Endurance Test. The vehicle was ready to hit the track and the first 11 kilometers were overcome without any problems with excellent passing time. After that there was a change of driver within the prescribed time of 3 min. The other driver had to stop after 4 laps due to gearbox problems. It was determined that immediate failure and return to the track were not possible. Unfortunately, in the Endurance Test the team had to split 9th place with 16 other teams, which for similar reasons failed to complete the most demanding competitive discipline.

Although the problems were affected on results in dynamic disciplines, satisfied with the results achieved in statics, Tenfore Road Arrow team members returned to Belgrade and getting ready for new challenges.

In August, we expect another competition organized by Formula Student teams from the Balkans – FS Alpe Adria. As we prepare the vehicle for new tracks, here’s a bit of the atmosphere from the Netherlands and Hungary.