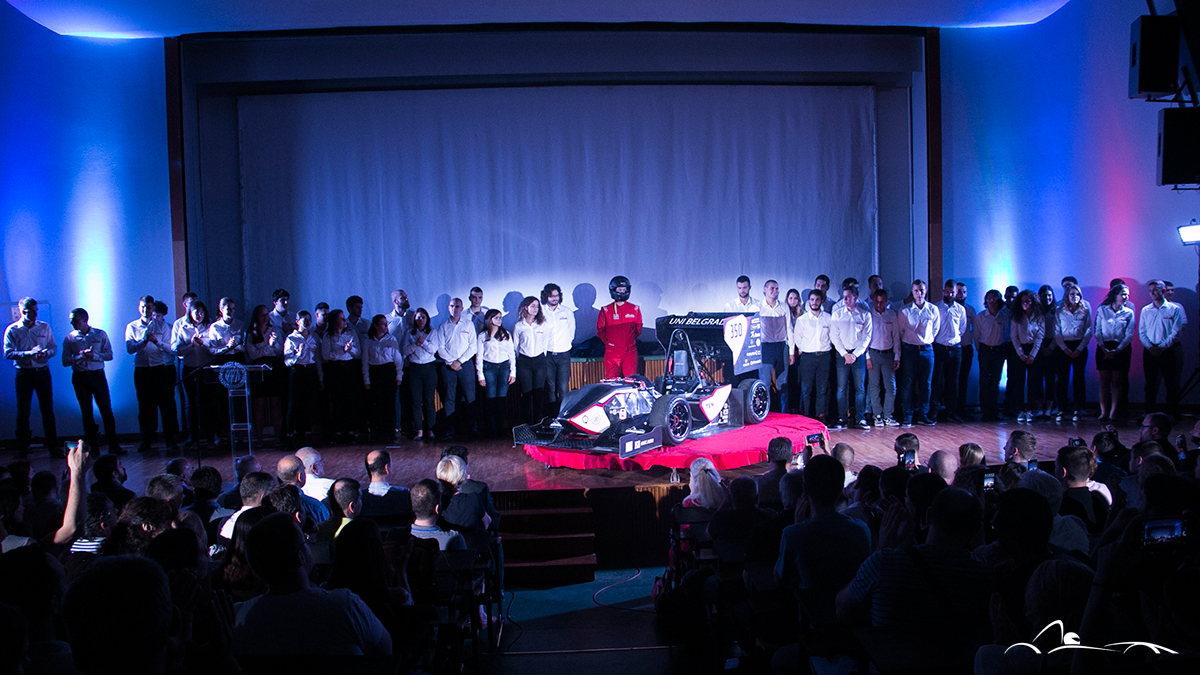 Formula Student team Tenfore Road Arrow has presented their eighth vehicle on Monday, June 24, at the Faculty of Mechanical Engineering in Belgrade. More than 700 people attended the rollout of a new vehicle which, with our students, will represent Serbia and the University of Belgrade at prestigious Formula Student competitions.

This team, after presenting and testing vehicles, is expected to attend at two prestigious competitions – in the Netherlands and Hungary.

Team Tenfore Road Arrow has great support from its mentor, professor Marko Miloš. He first addressed the audience and pointed out that it is a great honor for him to be at that place, as the leader of a great team of young people which have bright future.

After that, the audience was addressed by the Dean of the Faculty of Mechanical Engineering, prof. Dr. Radivoje Mitrović. He said that this project is a “jewel” of Belgrade and Serbia, and that this is an opportunity for students to turn their ideas into reality, travel the world and gain excellent competencies to start their own business. He mentioned that the basis of all students is their enthusiasm, energy and perseverance.

State Secretary of the Ministry of Education, Science and Technological Development, prof. Dr Vladimir Popović was at the ceremony, and he said that the Ministry supports the Formula Student project since 2010. and that it will be the same in the future.

After that, the audience was addressed by prof. Dr Nenad Zrnić,  vice-rector of the University of Belgrade:  – I was very proud, as vice-rector of the University of Belgrade, but also as a professor of the Faculty of Mechanical Engineering, and as a ordinary citizen of the Republic of Serbia, when my colleagues from Italy told me that they closely followed the achievements of our Fomula Student team, and when they showed me photos of our vehicles in the competitions. Across Europe, people talk very nicely about our activities, our construction, and our achievements.

After the vice-rector of University of Belgrade, the audience was addressed by the Dean of the Faculty of Technology and Metallurgy prof. Dr Petar Uskoković, who said that the enthusiasm and energy of Tenfore Road Arrow team are fantastic and pointed out that always proudly talk about such student projects.

After him, the audience was addressed by the General Major Bojan Zrnić, a representative of the Military Academy, he pointed out that he is proud of all the officers who are active members of the Tenfore Road Arrow team nad that they are currently studying master studies at the Faculty of Mechanical Engineering. He also said that Tenfore Road Arrow will have the biggest support of the Military Academy in the future, and that the Academy recognized the enthusiasm, effort and work that the team members invested in construction of  their new vehicle.

Andrijana Dragićević, representative of the team’s general sponsor, company Tenfore, in her speech, pointed out that support to such projects is very important and how glad they are to cooperate with young and prospective students of the University of Belgrade.

The audience was addressed by the Electric Arrow team leader, Nikola Novaković, he said more about the development of the first electric vehicle in Serbia. Nikola presented his team, that the audience greeted with a loud applause.

After the presentation of this project, the audience was addressed by the Tenfore Road Arrow team leader Lazar Stojnić, student of master studies at the Faculty of Mechanical Engineering. He took the opportunity to say thank you to all alumni members, professors and sponsors who support this project.

He pointed out that everything that the Tenfore Road Arrow team accomplished is consequence of years of experience, which is transmitted from generation to generation. He said thanks for the support to the old team members, to all the companies that have supported the team this season, and especially to the general sponsor, the Tenfore payment institution.

After that, Lazar presented his team members. 45 members of the team came to the stage, where the audience greeted them with a thunderous applause. Finally, „Road Arrow 2019“ rollout has happened. A completely new and improved design of this racing car has  excited the audience.