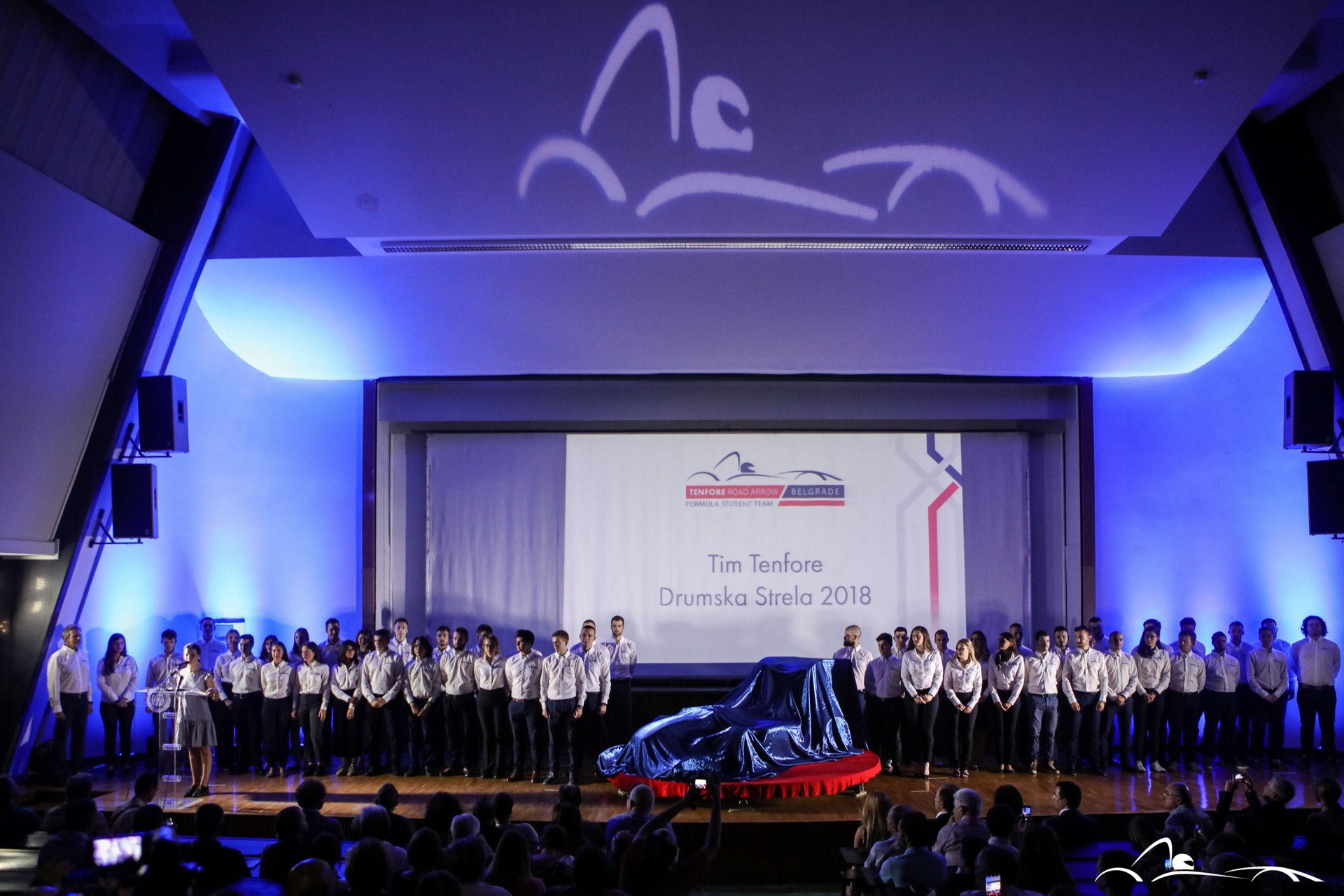 Formula Student team Tenfore Road Arrow has presented new, seventh vehicle for the 2018 season. On Monday 11th of June, more than 700 people came to a crowded amphitheater at the Faculty of Mechanical Engineering to see the reveal of the formula with which our students will represent Serbia at the prestige, Formula Student competition.

Among the participants were deans, professors, friends of the project, team alumni as well as proud parents and friends.

At the beginning of the ceremony, we reminded ourselves of the team’s history and previous successes and innovations.

The audience was addressed by the Dean of the Faculty of Mechanical Engineering, prof. Dr. Radivoje Mitrović. He said that Formula Students project is a „jewel“ of Belgrade and Serbia, and that this is an opportunity for students to turn their ideas into reality, travel the world and gain excellent competencies to start their own business. Also, he mentioned the previous mentor of the team, prof. Dr. Aleksandar Veg, and said that we are aware of everything he has done for this team and its promotion, and we are infinitely grateful to him. He once again emphasized that he is sure that the state will recognize the importance of this project and that we will get the support of the Government of the Republic of Serbia.

State Secretary of the Ministry of Education, Science and Technological Development, prof. Dr Vladimir Popović, said that this project lives because of students’ enthusiasm, their energy and perseverance. He expressed the opinion that the Formula Student project launched many other projects at the University of Belgrade. On behalf of the Ministry, he thanked for the existence of this project and said that they would continue with their support, because of their belief in the future of the project, especially due to the large presence at the event.

Tim Tenfore Road Arrow has been supported by Professor Marko Miloš for years. This season, he has been following the work of the team as a mentor, which, as he himself pointed out, was a great honor. In a touching address to the audience, he recalled prof. Dr. Aleksandar Veg, expressed his gratitude, but also the obligation that after all that he had done, he has to proceed along the same path. As he himself was following the entire season and participating in it, he said that behind a new formula lies an incredible effort to realize the engineering work and evidence of the knowledge that students acquire at the faculties that participate in this project. With the enthusiasm of the team, he believes that we will continue to achieve good results.

After a video that showed everyone a part of the atmosphere of the 2018 season, Miljana Stojanović, a student at the Faculty of Technology and Metallurgy, a Team Leader of Tenfore Road Arrow, also addressed the audience. She took the opportunity to thank all alumni members, professors and sponsors who have been supporting us for years. As one of the most important and most interesting events of the season, she announced that the team gained the trust of the payment institution Tenfore, which from now on is going to be our general sponsor.

Marketing Manager of the company Tenfore, Ivana Jakovljević, said that speed and security are two key words of their business, and that this is what the Tenfore Road Arrow team is the best at. She also thanked parents and family of students, who laid the foundation for this success, and professors who upgraded it. “They surprised us with their ideas, ambition, effort, knowledge, creativity, and they showed that they can live in Serbia, succeed, and be among the best in the world!”

48 members of the team came to the stage, where the audience greeted them with a thunderous applause. Finally, Road Arrow 2018 was revealed by the team coordinators, who took on the greatest responsibility this year and who will lead the team in all competitions.

For more impressions from the Rollout, See the live stream of events on our facebook page, or see the gallery: